Fatal and the Rabbit 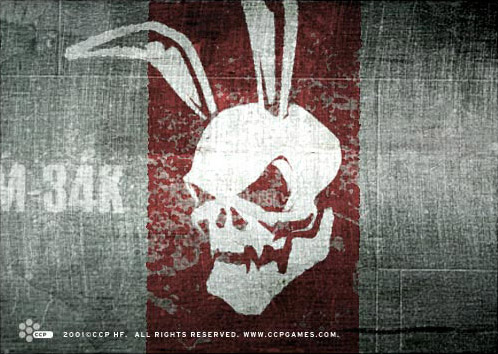 Jirai Laitanen and Korako Kosakami, today better known by the nicknames they gave themselves: Fatal and the Rabbit, began their careers as promising space ship captains in the 37th (Octopus) Squadron of the Caldari Navy. Laitanen was a shrewd and gifted captain, with a glib tongue and charismatic smile. Many expected him to reach a position of authority in the end. But he was also vain and greedy; traits that led to his eventual desertion. Kosakami was much more introvert than his friend Laitanen, but he had a brilliant mind and was a technical wizard.

When, in the space of one week, Laitanen was passed over for promotion and Kosakami was blamed for a lethal crash landing, the two friends decided to desert. They stole a couple of Condor-class frigates, the same they still use today, and set off to a pirate-infested sector between Caldari and Gallente space. This took place in YC 86.

It didn’t take long for them to establish themselves among the criminal society and few months after their arrival they’d set up their own criminal organization, called the Guristas, which is an amalgamation of two Caldari words meaning ‘naughty people’ and is also a slang term for ‘gang’.

The Guristas are famous for their raids into civilized territory, something that very few pirate clans are willing or able to do. The mission of these raids is most often simply to steal cargo or passengers (for ransom) from freighters, but on numerous occasions their main intention seems to be to sabotage empire installations (mining facilities, sentry guns, and the like). This has led to speculations that some unscrupulous empire companies or even governments are hiring the Guristas to take out property of the competition.

But by far the most celebrated of the Gurista raids was when they kidnapped the Gallentean ambassador to the Caldari State and received an enormous ransom from his family. The kidnapping itself was a brilliant feat and clearly demonstrated that Fatal and the Rabbit were far from being the stereotypical brainless brats that most people regarded pirates to be.

Ambassador Luecin Rileau, son of the diamond-king Darouen Rileau, had only one noticeable vice, and that was gambling. His gambling fascination was probably the main reason why he had sought to become the Gallentean ambassador to the Caldari State, a notoriously tricky position. Ambassador Rileau frequented the Grand Tiegjon Casino in the Echelon Entertainment Studio station in the Caldari system of Vellaine. It was there that Fatal and the Rabbit struck.

The two of them docked at the station under in disguise. The Rabbit (Kosakami) stayed behind in the ship while Fatal (Laitanen) entered the casino. Fatal involved himself in a game of Pettokori, a popular electro-board gambling game, which Rileau was participating in. In the course of the game, Fatal deliberately lost money to the ambassador and finally, when he’d run out of money, Fatal offered his ship to the ambassador. The ambassador accepted and proceeded to win the game. Fatal offered to show the ambassador his newly won ship and Rileau, accompanied by several bulky bodyguards, accepted.

The Gallente Federation was unable to apprehend the culprits and in the end the ambassador’s family paid a huge ransom in uncut diamonds to the Guristas. All this drama received a great deal of media attention and even if Fatal and the Rabbit relished the attention for a time, in the end it only hampered them. Being the most notorious criminal in the world of EVE has a downside, mainly that traveling around is not as easy as it used to be. This has forced the Guristas to lay low for the past few months.