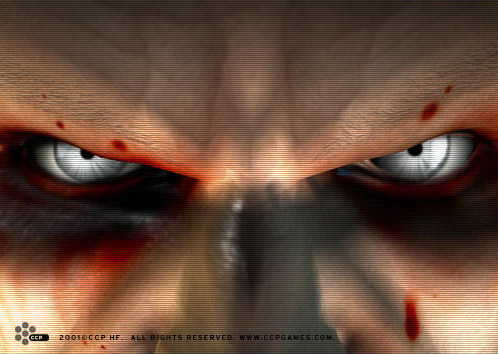 ‘Every seat in the passenger cabin was occupied, the occupants sitting so peacefully one could believe they were napping, if it weren’t for the fact that each and every one had been completely drained of their blood. The same fate had befallen the rest of the crew, even the captain in his capsule was now only a dry husk…’ News like this can now be heard almost every week from some remote region near or within Amarr space. The perpetuators are commonly called the Blood Raiders, aptly named for their habit of draining their victims of blood and taking it with them.

The Blood Raiders are part of an ancient cultist faction called Sani Sabik, meaning Bloodfriends. The cult first appeared thousands of years ago on Amarr Prime, long before space travel came into being. The cult was based on schismatic sect of the Amarr state religion, which advocated that some people were born for greatness and other people only lived to feed and breed these geniuses. To this the cult added the obsession of the Amarr elite - the Holders - about eternal life so the result was a cult so pervasive and destructive that the Amarr authorities immediately stamped down on it. But the cult lived on in the shadows, every so often mutating itself anew. At one time in their history they started using blood in their gruesome rituals, until then they’d had only used blood in the initiation ritual, but now it became the focal point of their supposed search for eternal youth.

Today the cult exists in numerous more or less independent sects throughout the Amarr Empire, and some have even moved their business to other empires or neutral space. Each of the different sects of the Sani Sabik cult vary in their rituals and doctrine, some are inoffensive and almost inactive while a few have taken ‘blooding’ - as they call the draining of blood from a body - to new heights. There are stories of ‘blood farms’, where people are kept against their will and blooded regularly; other stories tell of sects that engage in necrophilic and even cannibalistic activities. As little is known of the inner works of most of the sects it is difficult to say whether these stories are true or just urban legends.

The most notorious of the sects is the one under the leadership of Omir Sarikusa, an Amarrian with some Caldari ancestry. Before Omir took over, the sect was already infamous for killing children as they were considered to have ‘purer’ blood. Omir has abandoned that practice, but instead his sect has started targeting cloned people, as they believe blood from clones is better suited for their freakish blood rituals. In their search for cloned people, Omir’s sect has taken to space and in few short years their frequent attacks on passenger ships and other space vessels have made them feared throughout Amarr space and far beyond.