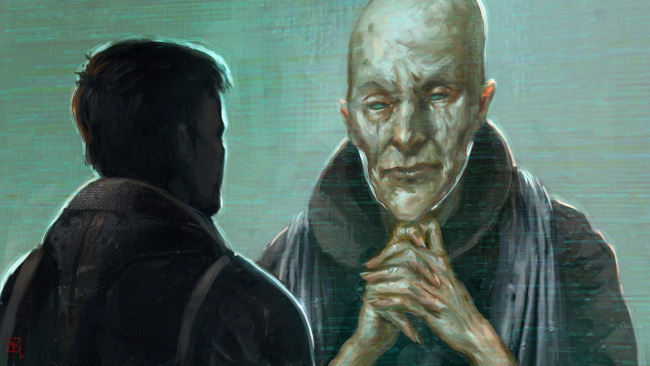 "Director, there‘s a message for you."

"Sorry, sir. It's the Office One response."

For the first time that morning, Mentas Blaque took his eyes off the week‘s insurgent update. He pushed his chair away from the console, stood up.

By the authority vested in me as President of the Federated Union of Gallente Prime, and in order to establish a Council of Armaments Advisors working under Federation auspices, it is hereby ordered:

"End," said Blaque. He rubbed his eyes and sat back down.

A few seconds passed, just him alone with himself in that quiet chamber. Then he pushed a button and said: "Corporal Ormonde, get your men ready to roll out."

"Sir, I don‘t know. They‘re knocking now, but we don‘t see anything. There‘s no response at all."

"Continue for five then report," came the squawk through the radio. Corporal Argus Ormonde flipped down his visor and took a few steps toward the gigantic marble sculpture beyond which, several yards in the distance, he could see the entrance to the cordoned-off section where this eccentric freak of an arms dealer was keeping himself.

"Nothing still," came Fregal‘s voice. "I‘m listening to the knocks sound off into the far passage, but the echoloc‘s giving a weird picture. It doesn‘t even sound like there are walls in there."

Despite himself, Ormonde sighed. "Fine," he said. "Initiate breach protocol alpha three and wait for my go-ahead."

Bad PR, but whatever. If you‘re batshit crazy for no better reason than that you have a lot of money, and you want to do things the hard way, then it‘s your batshit crazy prerogative to get roughed up a little.

He braced himself behind a pillar, gave the standby signal to the flank unit, then flicked the go switch on Fregal. To the Director he sent one signal: operation green.

In the insulated comfort of his command center, Mentas Blaque felt an involuntary shudder of premonition. Two seconds later, there was a deafening crackle. Voices, a rumble. Purposeful running

The Black Eagles, getting things done when no-one else possibly could. It always gave him a small thrill, but today he was having trouble mustering the excitement. He‘d had a diffuse melange of bad dreams the night before, and ever since the morning had carried with him a nagging sensation of somehow being outdone.

"In position," said Sergeant Fregal. "All right, we got two sentries and a few scout minis. Two, four, interceptor la—"

There was a crack. Sergeant Fregal stopped talking.

There was no reply. The noises on the radio had died down to near silence. It began to dawn on him that nothing like this had ever happened to his men before.

He cut to Control. "Get me Jacus Roden on a private line," he said, "and do it absolutely right this instant."

It wasn‘t quite who he‘d been expecting. Faced with a man who had made possible, through his ingenuity and business wits, the destruction of untold countless millions of lives and livelihoods, he now realized he‘d subconsciously hoped for a somewhat more forceful figure. Jacus Roden was a slight man, perhaps five foot seven, about sixty years in appearance, with a slow deliberate manner and a perfectly hairless head.

"Hello, Mister Blaque." The old man was calm, quiet, rather composed given the situation.

"Mister Roden," said Blaque pleasantly. "Would you be interested in explaining why it is that I‘ve lost contact with some of my best men after they initiatied their attempt – their lawful attempt, I might add – at communicating with you on behalf of the Gallente Federation?"

"Certainly," said Roden. He scratched his nose and pressed a small button on his desk. "Their equipment malfunctioned within our electromagnetic field, but they‘re being taken good care of. You‘ll see them again safe and sound shortly."

Inwardly Mentas balked at the man‘s presumption, but he kept his demeanor carefully ironclad. "I‘m fully presuming, then, that this courteous treatment of our troops," he said, "is a sign that you‘re taking our initiative in the spirit expected of a loyal citizen of the Federation. Am I correct in this, Mister Roden?

The old man sat down in his chair, pushed a few more buttons on his desk and smiled airily up at the camera, without really looking at it.

"You are correct in that I am a loyal citizen of the Federation," he said.

"And what would make you think this constitutes acceptable treatment of Office One emissaries?"

"I am motivated by nothing but love for these fine men."

"So you subdue them as a first course measure? Why not just talk?"

"Because they haven't heard what I'm offering and they didn't come with the intent to listen."

Two seconds passed. Mentas Blaque breathed in, then out, then in.

"And what is it that you're offering, exactly?"

"I just want what's best for everyone, Mister Blaque," the old man said. He spun in his chair and stood up. As he did so, for one second a metallic jaw line came into view, a streak of iron that ran from the side of his neck along the jaw to the bottom of the chin. "I just want everyone to be able to handle their business in a manner that befits our great Federation. As we were proceeding until our good president decided to stifle the wings of creative enterprise." He stopped at the corner of his desk and faced the camera squarely. A wry curve, half a smile and yet not, played at the corner of his lips.

Mentas Blaque raised his chin almost imperceptibly and executed a well-practiced flare of the nostrils. "The President makes whatever decisions are necessary at any given time," he said. "It has been deemed that the new arrangement will lead to a stronger and more unified Gallente, and it's neither your place nor mine to question its value. It has not been idly arrived at."

"'Hierarchy is the grand streak in the human painting,'" said Roden. "Who was that? Fouel? Geremande? One of our greats, at any rate."

"I'm sure you can find out later, Mister Roden," said Blaque. "After you've released our men and submitted to whatever punishment the courts will see fit to bestow for your transgression." His patience was beginning to chafe away. This was supposed to be an eccentric lunatic, not a well-spoken intellectual. Somehow the high ground had begun to rattle.

"Enterprise is the foundation of our great experiment, here, wouldn‘t you say?" asked Roden, standing stock still behind his desk. Across several constellations and millions of kilometers, Blaque fancied he saw the tiniest flicker of light appear in the old man‘s eyes.

"If you start undermining the foundations of an enterprise,“ he continued, his back straightening and his gait becoming more forceful as he began a slow circle round his desk, "the rest of it will all come down. And the Federation," he said, velvetine menace creeping into his voice, "is not a lightweight enterprise. It is not something one crawls out from under."

"What," Blaque began, then stopped. It was all getting to be a bit too much. Most likely the old man was simply driven to folly by years of wretched excess, but there was a certain sort of humor in his manner, a meta-awareness that hinted at hidden knowledge.

Just as Mentas Blaque was beginning for one of the very few times in his life to feel the befuddled beginnings of true admiration, the old man said, "I think you may have a message." He sat down in his chair and leaned back.

No way. No way you could do this, old man. Mentas cut the vidlink and got up from his chair. His practiced and capable mind struggled to assess the situation. Somehow a single purveyor of weapons tech had managed to bring the entire military-industrial complex together against a presidential decree. Obviously prior information, obviously planned well in advance, and yet completely ridiculous in its scope and audacity.

A full minute passed, during which the silent chamber's only sounds were the hum and bleep of dutiful machinery. Halfway wishing he had some way of commemorating the occasion, he sat down once more in the still deadness of his control center and fixed his eyes on the screen in front of him.

Into his microphone he quietly subvocalized, "Control, recorder off."

He switched back to Roden, unmuted the open channel. The old man was sitting in his chair, fingers splayed across his lap. The wry curve, by now, was more than a half-smile.

"Mister Roden," said Mentas Blaque. "It looks like you and I need to talk."