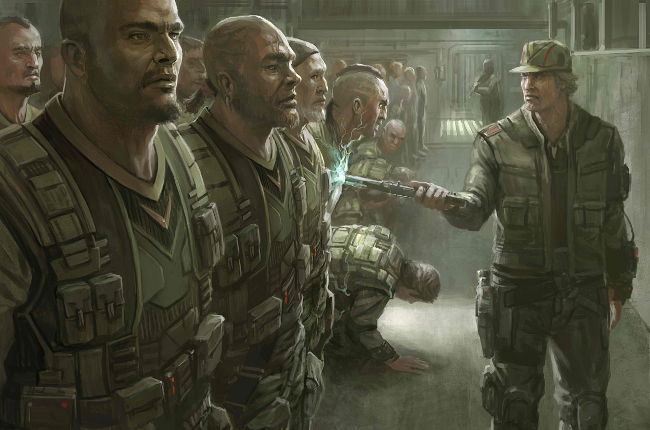 "I am not going to train you; I am going to try to kill you." - Valklear Instructor

During the long years of enslavement and the great war for liberation, the Minmatar tribes found themselves sorely lacking in able-bodied solders. They were forced to create them from their most dangerous criminals – murderers, rapists, thugs, etc. The program was a remarkable success. The Valklears won the Minmatar a slew of military victories and emerged as the Rebellion’s most notorious elite force.

With the end of the Rebellion and the formation of the Minmatar Republic, some politicians within the new government questioned the need for such an iniquitous military force: The need was gone, peace was won and surely such ugly necessities of the past should be resigned to history to make way for the new Minmatar age? The military commanders would have none of it, and the Valklear program remained and continues to prosper to this day, although it has lost none of its infamous reputation.

Valklear commanders rely wholly on specialized recruiters to fill their ranks. They tour the courtrooms and judgement halls of the tribes, and with a trained eye they pick out the prime cuts of criminality from the great swathe of vicious, vile, and corrupt. Once the recruiter has selected a candidate, he works on brining the convict into the system. Each recruiter has his own persuasive technique, but for many hard convicts, presented with the option of a lifetime behind bars or a shorter term in the military, the choice is a rather obvious one.

The recruiter’s selection is not as clear-cut as one may think, though. They recruit from a broad range of the criminal fraternity. One day, a violent psychopath may be paid a visit, the next a serial killer, and then perhaps a corrupt lawyer, a notorious embezzler – even people who may have never held a weapon in their lives. The path the criminal has taken matters less than their skills, instincts and the inherent potential the recruiter perceives.

Once a candidate has accepted the proposition, they are silently removed from their cells and the penal system loses them in a maze of red tape and paperwork. Any digging within their records will show that these prisoners took their place in the death chamber or got transferred to a maximum-security facility. The Valklear candidates are lost in the system and will never be found.

When the candidate is removed from their prison cells, the training begins in earnest. Hundreds of evil-minded bastards, bloody killers, and fiercely intelligent criminals are put through one of the most gruelling training regimes known in New Eden. Through intense training, the prospective Valklears are melded into unstoppable war machines. Instructors push recruits beyond their limits in order to see if they push back. The candidates are beaten to see if they will get up again, then beaten down even harder. Recruiters want that indomitable glint in their eye that says, “Fuck you.”

Those candidates that wash out are thrown back in the penal system with even harsher sentences. The ones that make the grade – and to the recruiter’s credit, it is a surprisingly high percentage – are then indoctrinated into the Valklears proper, where the expectation of “tough bastard” gets re-evaluated once more.

A Valklear’s tour of duty is dependent upon the term of his original sentence, not including the full year of training after selection from prison. If a Valklear survives his tour, he immediately becomes a free man. He is also given a new identity, and any links to his criminal past are wiped from the records and replaced with a suitable cover.

After their tour with this elite force, most Valklears find a calling suited to them in other military branches. The former Valklear will in turn get transferred to another unit, though his new comrades will remain ignorant of his background.

Currently, some of the highest-ranking members of the Minmatar armed service were once Valklears. This fact is kept top secret; the public remaining ignorant of a Minmatar military run by murderers and thieves.