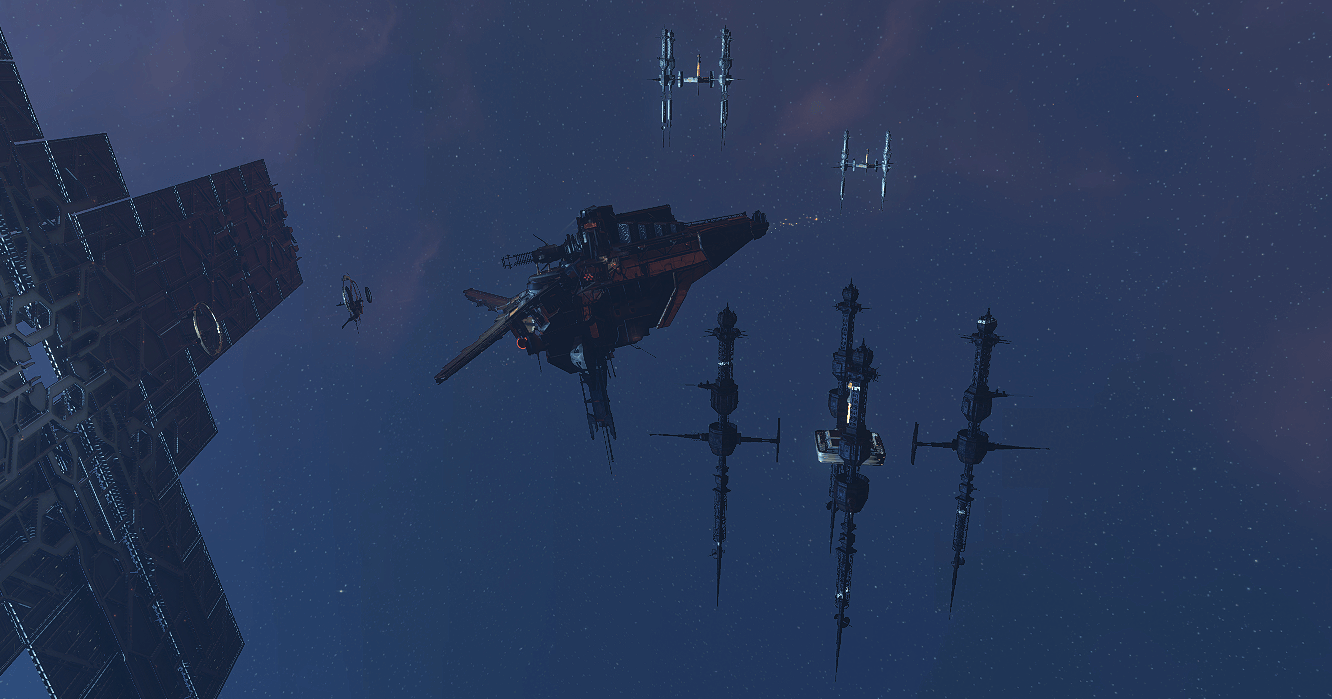 Above: Prototype Stellar Transmuter in Vard shutdown by Republic Forces

Pator, Heimatar – Successful efforts to shutdown the Prototype Stellar Transmuters in Egmar and Vard have been met with celebrations across the Minmatar Republic. Sanmatar Maleatu Shakor has hailed the efforts of Minmatar engineers, Republic Fleet units, and the fighters of the Tribal Liberation Force for their "tremendous service to the Seven Tribes of Matar."

Following over two weeks of desperate efforts since the extreme stellar event in Turnur, the captured Stellar Transmuters in Egmar and Vard were safely shutdown with Republic science and engineering teams reporting no signs of lasting disruption to the stars of each system. Republic Fleet forces were also able to maintain secure occupation of the transmuter sites due to the ongoing control of the systems by Minmatar militia forces.

Well-placed sources within the Shakor government indicate that monitoring of the Turnur star's emissions and the effects on local space-time in the run up, through and after the stellar event helped to guide the Republic's engineering teams. Minmatar research efforts were also considerably bolstered by militia and loyalist capsuleers recovering large quantities of valuable data on the Stellar Transmuters.

The Scope has been told that there are indications that Amarr efforts were focused on "stellar engineering in an attempt to create new wormhole pathways, possibly connecting all three test locations." One Republic source has also stated that the "partial Amarr success in Turnur was clearly achieved without regard for the cost and should be interpreted as an attempt to pave the way for a large-scale invasion of the Republic." The Amarr Empire has made no comment on these claims.

Above: Federation Stargate under construction in Intaki system

Intaki, Placid – Former Presidential Candidates Shaileen Ramnev and Suvio Bellaron have publicly questioned the apparent militarization of the Intaki system as further infrastructure projects are being undertaken by the Federation Navy following their invasion and "liberation" of the system. The appearance of stargate construction and naval station projects in particular have raised fears of constant military presence.

Former Arcurio Mayor, and strong runner-up in YC122 Presidental Election, Shaileen Ramnev has stated her "unequivocal support for the removal of the Intaki system and people from a position they should never have been in" but has expressed her concern that "further military provocation by the Federation in the Intaki system will simply repeat the cycle of conflict between Gallente, Caldari, and Intaki in another guise."

Senator Suvio Bellaron, representing the Federal sub-district covering the city of Lenoika on Intaki Prime, has been more critical and singled out President Celes Aguard for some harsh words. "Were the Federal Senators for the Intaki system consulted before the invasion? Yes. Did we consent to the action? Yes, with some misgivings, simply to see our people freed from constant warfare under the absurd militia system. But did we agree to a permanent Federal military presence? No, we did not. President Aguard is quick to offer reassurances and make deals but time and again we've seen that this Federation President will break all agreements, new or old. What basis for lasting security is that?"

Reports of Federal Marines expanding their presence beyond their control of the Kainta Yavaat Transorbital Launch Facility have also led to protests by many sections of the Intaki diaspora. While Intaki separatists have increased their political agitation following the invasion, the largest protests by far have come from the Intaki autonomists advocating maximum Intaki independence within a looser voluntary federation. The Intaki autonomist protests have been joined by many from across Federation society, forming a core which many liberal and regionalist Gallente citizens have been willing to support.