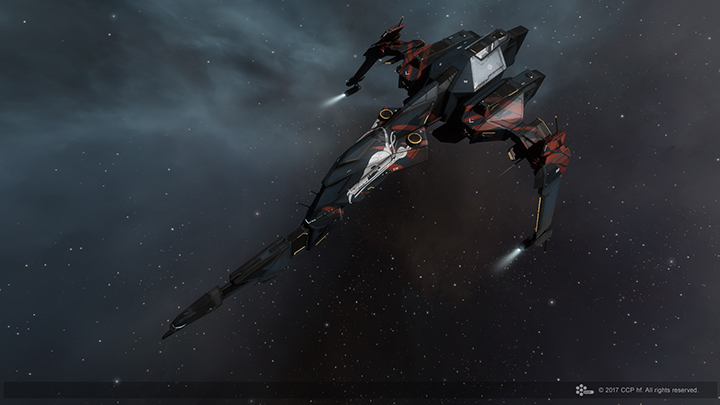 When the Caldari-Gallente War broke out, the Caldari forces were heavily reliant on single-pilot fighters to make the most of their relatively limited numbers. The use of fighters, supported by carrier vessels converted from all manner of large military and industrial ships, dominated Caldari doctrine for the early stages of the war. The 37th Fighter Squadron was one of the many units operating in the Caldari space forces.

After the break out from Caldari Prime, fighters continued to be used by the Caldari but were increasingly countered by Gallente use of autonomous mines that steadily evolved into hunter-seeker drone fleets. In the face of this new threat, the Caldari upgraded their fighter designs to heavier ships with stronger shields and more powerful weaponry. They called these new designs, many requiring several crew, 'frigates'.

The 37th was one of many squadrons outfitted with the new frigates and rapidly distinguished itself for the innovation of its tactics. The nickname 'Octopus Squadron' was soon acquired and the crews of the 37th were regarded as amongst the elite of the newly established Caldari Navy. When capsule technology was provided to the Caldari by the Jove, the 37th was one of the first squadrons to benefit from its adoption.

After the armistice treaty between the Caldari and Gallente in YC12, the 37th (Octopus) Squadron became part of the standing space forces of the Caldari Navy. For most of its history the 37th remained a frigate force, typically consisting of three flights of frigates. While the squadron relied on wartime designs in the post-war period, in later decades the squadron's configuration generally consisted of Kestrels, Condors and Griffins in Red, Blue and Green Flights respectively.

The Octopus squadron has had a long and storied history but has not been without its scandals and failures. The two founders of the notorious Guristas Pirates, Jirai 'Fatal' Laitanen and Korako 'The Rabbit' Kosakami deserted from the Caldari Navy to found the outlaw group after serving with the 37th. The fact that the renegades' squadron callsigns have become infamous as the nicknames of two of the most successful pirate lords of the Northern fringes is occasionally a source of embarrassment to the Caldari Navy.

The 37th also took part in the failed defence of the Caldari Navy Leviathan-class titan CN Shiigeru at the Battle of Caldari Prime in March YC115 and its radicalized Provist officers and noncoms were involved in the notorious debacle of Operation Spectre in November of YC115. Following courts martials of many officers and noncoms of Octopus Squadron, Wing Commander Sami Okuuda was found dead, evidently having taken his own life in a personal 'Tea Maker Ceremony'.

While some in the Caldari Navy's upper echelons argued for the disbandment of the 37th (Octopus) Squadron, the wartime accomplishments and fame of the unit combined with Commander Okuuda's option to take an honorable course allowed traditionalists to carry the day in favor of retaining the unit, albeit with a major re-organization. The famous 'Red Flight', in particular, was upgraded to an assault flight of missile cruisers.

The 37th was substantially re-organized after the Battle of Caldari Prime, Operation Spectre and the subsequent courts martial of YC116. Octopus Squadron is considered a core element for the purposes of Caldari Navy operations and has a flight roster designed so that it can be deployed at will on any mission necessary. Particular mission requirements involving ships and equipment unavailable to Octopus Squadron are handled by co-deploying flights from one of the Caldari Navy's many specialist squadrons.

As of YC119, the 37th (Octopus) Squadron's seven flights are organized as follows: