Initially the hydrostatic capsule, as given to the Caldari by the Jovians roughly 120 years ago, contained no facilities for the clone-body retransplantation of those dying inside it. In addition, it proved fiercely maladaptive to the human body in myriad ways. All sorts of physiological differences between ordinary humans and their genetically enhanced Jovian counterparts served to make the pod extremely dangerous to humans in its original incarnation, and even the most rigorous training regimens usually failed to save people from the horrors of the mind lock or wetgraving. 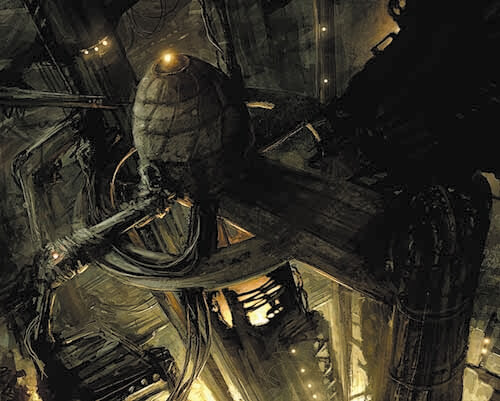 Added to this, the mere thought of hooking wires and tubes into one’s body and stepping into something as seemingly alien as a hydrostatic pod, filled with fluid intended to nurture the body through a state of what is essentially suspended animation, didn’t (and still doesn’t) appeal to the vast majority of pilots. For decades horror stories abounded as to the hideous things that could happen to a person inside a capsule (most of which, unsettlingly enough, were true).

For years, no single political or commercial entity had enough vested interest in pod tech to attempt a change in this public perception. The Jovians had held the official patent on the technology since releasing it to the Caldari, but had adamantly refused all monetary remuneration for its production. For this show of apparent nobility they gave no explanation; nor did they make any attempt to increase the technology’s practicality for those not endowed with their genetic superiority. Their motives in not doing so have been speculated upon broadly and extensively, but no consensus has ever been reached.

Throughout the period where the capsule and the clone had not yet begun their courtship, pods saw some use among those select few able to handle the intense nausea, hallucinations and general mental instability engendered by prolonged occupancy. Stories are told of pod pilot heroes flying on the side of the Caldari during the twilight years of the Gallente-Caldari war, executing maneuvers unthinkable to those encumbered with a full crew complement and the bothersome necessity of using vocal commands and hand-eye coordination to steer their vessels. Such pilots were a rare breed, though; because of the technology’s inherent dangers, capsule-fitted ships were not yet in mass production and existing models therefore had to be retro-fitted at great effort and expense.

Excluded from general usage due to drawbacks which rendered it a ludicrously expensive exercise in mortal danger, the capsule lay dormant for years.

While new techniques in clone creation and retransplantation have made the process cheaper and more efficient today than ever before, the inherent unreliability of non-capsule cloning and the still-extravagant cost involved for prospective clients effectively prohibits the vast majority of planetside inhabitants from considering it an option. Additionally, moral and religious objections to the work done in the field have surfaced to some extent in every society where its products have become available. Derogatorily known as “Doomies” by those who don’t share their beliefs, these objectors, sometimes numbering among them major political and religious figureheads, have nonetheless exerted a considerable amount of influence on the way cloning is perceived by the general populace. Protests and riots over the issue, while rare, have taken place on numerous worlds since commercial cloning began, and while the cloning companies’ ceaseless marketing has yielded significantly greater public acceptance in the past few years, a number of people still feel strongly that the whole field represents a denial of humanity’s spirituality and should be abandoned for “safer” scientific pursuits.

Despite the advances made in cloning tech, in almost every single environment retransplantation of the mind at time of death is still risky ground. The crucial element in the process relies on a brain-scan snapshot being taken at the precise time of death and transmitted to the waiting clone, and so the transneural burning scanner required to do so needs to be mounted somewhere close to the person at all times. Since the snapshot itself causes massive physical damage to the gray matter, there can be no margin of error; it needs to be done at the exact time of death. In planetary vehicles, the cloning companies have experimented with mounting the transneural scanner in a variety of locations, but the almost limitless potentiality of planet-bound environments has proved time and again that it just isn’t safe – snapshots either go off due to false stimuli, leaving healthy clients in a vegetative state, or fail to go off due to circumstances unforeseen by the safeguard mechanism, leaving clients dead with no chance of retransplantation.

In the capsule, however, things are different. All the equipment needs to do is detect a breach in the pod, because – as every cadet has hammered into his head from the moment he starts training – pod breach, without exception, spells doom for the person inside. Therefore, the instant the egg begins to crack, two things happen: the wire-cap on the pilot’s head injects an instantly lethal nanotoxin into his bloodstream and the scanner sends its piercing light into his skull. Scarce seconds later, he begins the muddy climb towards consciousness in a new body, light years away.

3. A Match Made in Heaven

It was not until eight years ago that clone manufacturers realized the vast potential of the hydrostatic capsule as a platform for their own technology. Funded by some of the largest megacorporation conglomerates in the universe, they set to work on capsule research and development, buying permission from the proper agencies to make modifications to the original blueprint.

After years of dedicated research, a breakthrough was made. In YC 104 (two years ago), the first transneural burning scan interface was successfully installed in a capsule; technology that would, within six months of testing, allow for perfect clone transplantation upon pod breach in 99.7% of tested instances – a level of reliability far surpassing anything the cloning industry had ever achieved before.

At that point, utilizing the considerable capital at their disposal, the cloning corporations managed through incessant and insidious marketing strategies to change the public perception sufficiently to allow them to push their industry into the limelight through the avenue of the hydrostatic capsule. After six months of exhaustive testing and tireless marketing, the transneural burning scan interface was finalized and public perception had been primed.

At the same time this was happening, CONCORD prepared and adopted legal acts which required every single manufactured capsule to be fitted with a transneural echo burning scanner, in addition to mandating clone contracts for every single pilot cleared to fly a capsule-fitted vessel. The official rationale given for the laws was that an increase in the viable applications of capsule equipment would allow for further exploration along the technological frontier as well as the trackless fathoms of deep space. It was, of course, widely whispered that the cloning companies had used their megacorp backing to effect these legislative changes, but those theories were never conclusively proven.

Whatever its real causes, the fact remained – the capsule and the clone were now inextricably joined, the legislative mandate consolidating their bond. Thus was born the PC pilot.