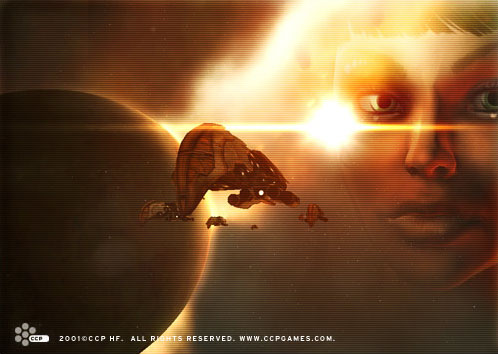 The Ammatars are descendants of Minmatars that collaborated with the Amarrians during the latter occupation of the Minmatar worlds. When the Amarrians were thrown out during the Minmatar Rebellion their collaborators fled with them. The Amarrians helped their Minmatar allies to settle in a few systems not far from the newly formed Minmatar Republic. The Ammatars regard themselves as the true rulers of the Minmatars, mainly based around the fact that a fair proportion of the old Minmatar aristocracy, or tribal leaders, were among them. In this vein they named their domain San Matar, meaning ‘true home’.

The term Ammatar was first used by the Gallenteans to distinguish between the two groups. Out of convenience even the Ammatars themselves started using it, stating that, with the help of the Amarrians, they’ve progressed beyond the old social structure of the Minmatar tribes. Indeed, the Ammatars have very deliberately abolished many age-old traditions of the Minmatar tribal society and embraced some Amarrian ones instead.

The Ammatar domain, San Matar, is semi-autonomous. The Ammatar rulers have full domestic control, but their foreign policies must have the consent of the Amarrians and their military forces are, nominally, under the authority of the Amarrians. The relationship of the two has been remarkably smooth in the past, with no serious quarrels.

The San Matar government is structured the same way as any other province of the Amarr Empire, with a governor at the head and district officials beneath him prescribing over the various departments of state. These heads of state are always Ammatar, although the governor himself traditionally is an Amarrian, and acts as the supreme representative of the Amarr Empire. As is to be expected not all Ammatars are eager for constant warfare with the Minmatar Republic. Those who are the most belligerent of them often feel that the Ammatar state is doing too little so they have formed a group of their own to fight the Minmatars. In a sense this group is a direct response to the independent rebel groups the Minmatar have and the guerilla tactics employed by either side are similar.

Since its inauguration San Matar has been in a constant struggle with the Minmatar Republic. Both states have expanded considerably in the last decades and now border on each other in numerous places. The Republic, backed by the Gallente Federation, had the upper hand for a while, forcing the Amarr Empire to repeatedly come to the aid of their allies, but in recent years the tables have been turning and the Ammatar have managed to set up military installations and space stations right under the Republic’s nose

Broad speculation existed for many years on where the Ammatar got the support for these conquests, as the Amarr traditionally were only willing to aid the Ammatars when the latter were under direct threat. Though nothing has been conclusively proven, it is widely whispered that for decades the Caldari provided clandestine support to the Ammatar in exchange for the promise of mineral rights to the rich territories being battled over. These allegations were a frequent diplomatic sticking point between the Caldari and the Minmatar, and the mere mention of them rankles both sides to this day.